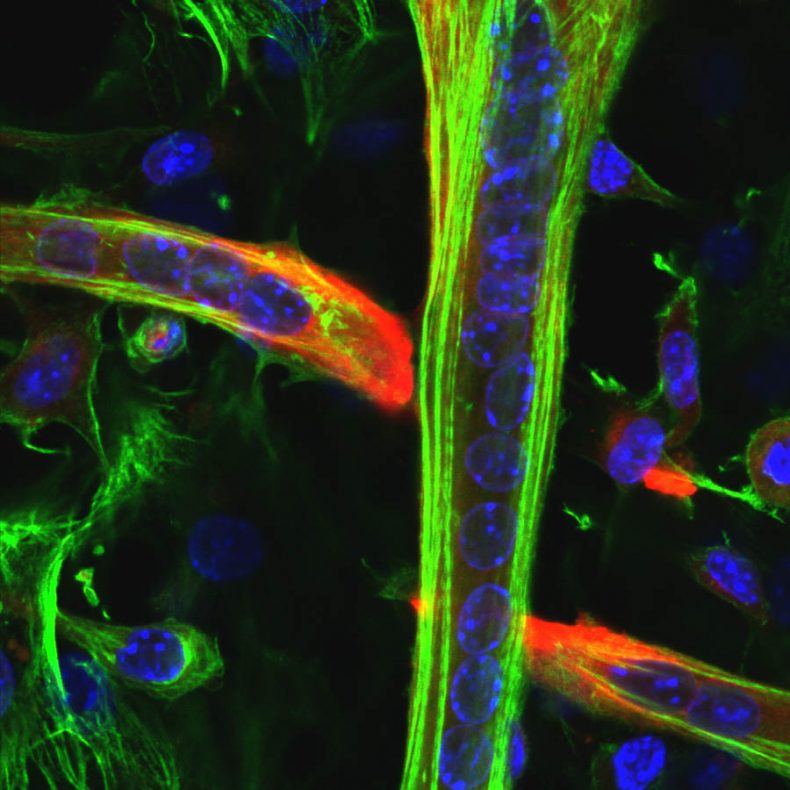 The University of Turku Doctor Honoris Causa Stefan W. Hell was one of the three recipients of the Nobel Prize in Chemistry in 2014. The Prize was awarded to Eric Betzig, William E. Moerner and Hell for groundbreaking work in developing high resolution microscopy. This work for Stefan Hell began in Turku.

Stefan W. Hell from Germany was conferred as the doctor honoris causa of the Faculty of Medicine of the University of Turku in the spring of 2009. During his doctor honoris causa lecture in May 2009, Hell explained how the development of microscopes has revolutionised research in life sciences.

– It can be said – and this is not exaggeration – that the development of resolution began in Turku, at the Unit of Medical Physics in 1993, stated Hell.

Professor Pekka Hänninen, who started working in collaboration with Hell in 1990 at the EMBL in Heidelberg and, later together with Professor Erkki Soini at the University of Turku, took part in developing super resolution microscopy, was delighted about the award received by his long-term collaborator and personal friend.

– The Nobel was awarded for research whose core publications and innovations originated at the University of Turku between 1993 and 1996, Hänninen summarises.

Originally, Hänninen met Hell in Heidelberg at the European Molecular Biology Laboratory. From Heidelberg, Hell came to Turku and received funding both from the Academy of Finland and industry sources for a project whose starting points were doubted in many larger countries of physics research.

The Unusual Career Path Paid off Professor John Eriksson from the Department of Biosciences at Åbo Akademi University and Professor of Medical Physics and Engineering Pekka Hänninen from the University of Turku are presenting an optoacoustic microscope in the same laboratory where Stefan Hell tested his idea in the early 1990s.

Hell got the first hunches of the Nobel-winning idea initially at the Student Village in Turku on a November morning 1993, when he was studying a quantum physics book of basic phenomena of light-interactions with molecules. This idea of the Stimulated Emission Depletion i.e. STED microscopy needed work and Hell instructed a Doctoral Candidate Jan Wichmann, who followed Hell to Turku from Germany, to do the calculations that were later presented in their publication in 1994.

Also experimental work started immediately and the first proof that the principle could be realized were published in 1995 – the first images for the real proof followed years later when Hell already was working at the Max-Planck Institute in Göttingen.

– Turku was the only place where my novel ideas of developing microscopy were tolerated and where I had the chance to conduct the research that I wanted to do. Without the University of Turku, I would have given up science. I am grateful for the support that I received here, said Hell on his lecture in the spring of 2015 when University of Turku was celebrating his Nobel Prize.

Hell has said that his decision of coming to Finland was thought peculiar in his home country, as German researchers typically left to work in the United States or United Kingdom at that time. He also received a grant to Oxford University, but wanted to continue his work at Turku.

– Here, I had the best chance to do what I wanted, so why go to Oxford? If you work with a passion, you can conduct revolutionary research anywhere, said Hell.

He has one piece of advice for the students.

– Follow your passion and do what you like the most, because then you are able to work harder and it is easier to be creative. Hard work will pay off eventually, promised Hell.

Hell’s research played a part in creating the basis for the nationally significant Turku BioImaging research infrastructure that was established in 2007. In fact, one of the BioImaging laboratories has been named “Hell” – the laboratory is the same where Hell first made his experiments with STED principles.

Bioimaging includes a broad spectrum of biomedical research techniques, such as microscopy techniques, and magnetic resonance and PET imaging. These techniques enable the application of laboratory-based basic research, for example, to developing new medicines or patient diagnostics, and help the development of medical breakthroughs.

Turku BioImaging is a broad, interdisciplinary science and infrastructure umbrella that aims to unite bioimaging expertise in Turku and works jointly with other imaging centers in Finland. The crown jewel of the centre is a brand new super-resolution STED microscope which is the only one in Finland.

Turku BioImaging offers its researchers a cost-effective possibility to versatile biomedical imaging. One of the crown jewels of the centre is a brand new super-resolution STED microscope situated at “Hell”-laboratory. All operations aim to bring the valuable equipment to as efficient as possible use by the science community and industry.

Turku BioImaging is the leader of the European Euro-BioImaging (EuBI) imaging organisation that offers researchers a possibility to use the modern imaging technologies they need in different parts of Europe.

The Euro-BioImaging organisation has 29 nodes (service centres) in 14 European countries. One of them is the Finnish Euro-Bioimaging Node managed by the University of Turku and Åbo Akademi University. It offers expert and imaging services at the Universities of Turku, Helsinki and Oulu.

The task of the nodes in the EuBI organisation is to guide and help researchers in finding the optimal solutions for research questions related to biomedical imaging and make top technologies available to them.

Until recently, the equipment used for imaging have required great investments from the research groups and universities. Whereas now, all researchers can use the needed technologies through the network, even if the necessary equipment is not available at their home university or even at their home country.

– Many users have an idea of how they could solve a research problem but cannot advance their research without the required technologies. Other users, then again, struggle with scientific problems and are unaware of the available possibilities that could be used for solving the problems, says Camilo Guzmán the manager of the Euro-BioImaging Finnish Advanced Light Microscopy Node.

– There will be collaboration between the units, and different devices will be purchased for each unit based on areas of expertise and to complement each other. All Euro-BioImaging applications from researchers wanting to use the devices in Finland will be sent through a common and simple web-access portal to Turku, and we will then direct researchers to Turku, Helsinki or Oulu depending on where the appropriate equipment and expertise is available, Guzmán says. The same web-access portal serves the whole EuBI organization and the task of Turku office is then to coordinate the functions Europe wide also at this level.